"It's always the quiet ones you need to watch closest."

Falcon Bravo oil platform, 250 miles offshore in the North Sea. Isolated. Forbidding. At the mercy of more than the weather and the sea.

The moment Eddie Capstan and his crew board Bravo to undertake a routine but dangerously understaffed maintenance mission, they are already counting the days until they leave again. However, they are not the only ones on board.

Released from its incarceration, a long buried obsession resurfaces, and soon they are counting the dead and missing instead. Everyone is suspect. Workmate turns on workmate. Could one of them be a killer, or is a more dangerous entity stalking the walkways?


OFFSHORE (c) 2012 Lucy Pepperdine
Published by Wild Wolf Publishing
ISBN: 9781311129628
Available from:
Smashwords
Amazon Kindlestore
NEW! If you join Audible and use the link below to claim Offshore as your FIRST audiobook, it earns a 'bounty'; an extra payment which will be split between the narrator for his hard work, and the charity the book supports - The Piper Alpha Memorial Trust.

One classic setting for the crime/horror genre used to be (maybe still is) the isolated country house/hotel/community cut off from the outside world by fog/rising tide/military activities and lots of variations on those themes. Offshore brings this up to date with its setting on a disused platform in the North Sea to which a skeleton crew is sent by helicopter to check it over so that the owners can sell it on. The author has obviously researched the nature of such structures very carefully and her account of the trip there, conditions on the rig and the James Bond-like complexity of its architecture and engineering is impeccable. This doesn't mean that she gets bogged down in details because her focus is on the personalities of the various crew members. Just being out there, with minimal facilities, lots of work to do and fewer personnel than they really needed to do it is a source of stress, but the presence of just one woman as well as personality clashes add further conflicts and resentments to the tension, interpersonal and sexual.
But all of this is nothing compared with the inhuman presence that lurks, unseen and unsuspected, deep in a sealed off part of the platform. Once it's unleashed, though, crew members begin to vanish, one by one, in horrific circumstances. The creature may belong to paranormal realms but its treatment of its victims is literally visceral. Readers are warned right at the beginning of the book that it contains `very strong language throughout, scenes of horror, peril and adult content' and, if you're of a nervous disposition, you'd do well to heed the warning. The book is well-written, the action sustained and relentless and it all adds up to a very satisfying read.

This review is from: Offshore (Kindle Edition)
There are certain themes in Horror stories which appear regularly - so often that they almost define the genre. Isolated locations. A mixed group of characters, who's varied personalities give a lot of opportunity for sub-plots, whilst also supplying sufficient material for a lot of gory deaths. A monster of some sort - the details slowly being revealed as the plot develops, and each detail being simultaneously more fascinating and more blood-curdling. A steadily increasing tension that rises with the body count. When done well, this structure is very effective - and Lucy Pepperdine does it very well indeed.

But she's added her own twists to the tale. For a start, the isolated location is an oil rig out in the North Sea - no spoiler there, it's on the cover picture! The characters are a maintenance crew, and the monster is - well, that would be a spoiler! Suffice it to say that the author has her own variation on the theme, and it's as nasty as any of the usual suspects!

The setting is a brilliant choice for a horror story, and she seems to have done her research - the oil rig is shown in realistic detail. There are also some very vivid sex and violence scenes, which might not be to everyone's taste, but are entirely in keeping with the story. The writing is smooth, absorbing and well paced, with a lot of twists in the story so that you're never sure what's going to happen next. Well, you may suspect that someone's going to die, but it's never clear who, or how. Or if anyone will survive at all!

Lucy's style of writing is so similar to the crime novels by Chic McSherry that it's quite uncanny. What I love about both of these authors is the natural and strong regional accent and slang used in their corner of Scotland. For some reason the accent adds to the atmosphere, reinforcing the cold, the dark, the crime, the desperation, the sheer misery and determination that seems to exude from Scottish crime authors.

Offshore has no lulls, no soft getting into the story, you are in it when you start on page 1. It's absolutely FABULOUS! I loved it, it's so visceral, tense, stressful, wrong, grungy... the superlatives are endless because Lucy nails everything I love in a good novel. Crime, murder, mystery, swift writing pace, a freezing North Sea, lashing storms, bloody fisticuffs, intrigue, drama, and of course, thrilling suspense. I refuse to share the ins and outs of my journey reading this because to tell you more would ruin your journey on the oil rig. I felt so sorry for them, I really did, I needed them to survive, and at times I had palpitations and was so caught up I was almost ready to put the book down and stomp and shout because I needed them to 'hurry up' 'move faster' HURRY HE'S COMING!

I was completely (and embarrassingly) immersed. Abso-lutely-bloory-loved-it!

I hope Lucy keeps writing crime thrillers, because my heart almost failed reading this one. Wow, this is better than 24 (and I watch that because it's a non-stop adrenaline rush). Thank you for an awesome read, please write more for us - for crime fans everywhere.

Wow! This read took me by the gut and twisted me in every direction. It’s scary, emotional, seat-of-your-pants stuff! Imagine a setting where you are entirely isolated- yes, an oil rig- and where the weather itself prevent help coming to you - yes, the North Sea’s unpredictability - and then imagine a madman in that place bent on killing everyone- yes, you have a real thriller before you.

Except it’s not a madman, it’s something far stranger, something you see only in your nightmares. You draw in a breath and barely breathe again until this tale is done!

Highly recommended to fans of the scary stuff. This isn't my usual genre, but I THOROUGHLY enjoyed Offshore. I ignored other duties and kept on reading! Brilliant work, an excellent read, well thought out and executed. Well done to the author! 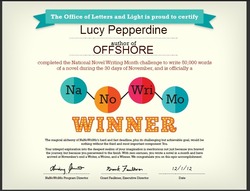