HE, SHE AND HIM 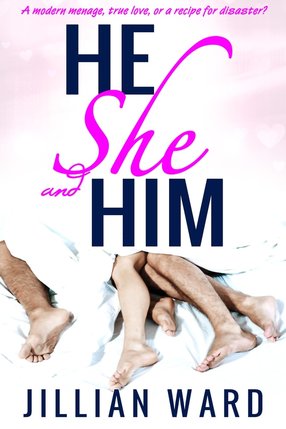 Linda is devoted to her husband, Tom. She also has a lover, Adam, and is content in her loving triangle, until fate intervenes, bringing the two men together.

When she falls pregnant, a plan is hatched - one man is the father, the other will be led to believe he is, but which one is which?

Can a modern ménage a trois be made to work, or is it always a recipe for disaster?

Ménage a trois...from the french meaning `household of three'. It's a term used frequently in literature. Love triangles, tend to appear most often when utilizing a man's favorite fantasy world of one man with two women. Usually in the context of 'whoo-hoo let's talk about sex, baby!'

Meet Linda, married and very happily so to Tom. Linda is a warm, loving soul who garners great pleasure in caring for her husband, especially in his current needy state of being wheelchair bound with a badly broken leg. She is endlessly patient, occasionally bossy, and very much in love with her husband. She has no such female fantasy of another man in her life or her bed.

Meet Tom, Linda's wheelchair bound spouse. He is very much in love with his wife, appears to be incredibly needy and not necessarily the strongest male on the planet; his needs would try the patience of a saint at times. Linda does not profess to being a member of the sainthood.

Meet Adam, handsome, isolated, independent and fiercely proud. He is currently living in the dilapidated remains of what once was his family estate, known locally as "The Castle".

Linda and Adam meet, introduced by Linda's lovable dog "Archie". From the outset they collide and keep right on a collision course that will lead them on to each others arms and ultimately each others beds.

If you expect this book to take you over familiar ground, ground that has been covered often in literature, you would be wrong.Author Jillian Brookes-Ward has cleverly and beautifully taken this love triangle beyond the expected. In doing so she explores the emotional depths of each character, bringing them to life with clever and insightful glimpses into what motivates them to react. These people become very real and intensely likeable under her clever penmanship, they go beyond a one dimensional image and we care about them. I found myself in turn, exasperated, angry, happy, sad, irritated and finally content...just the way I would respond to a dear friend caught up in a situation such as this. There are promises made and broken, an attraction that can't be simply shut down, and love explored on so many different levels. I will not spoil this for the reader by revealing too much. Suffice it to say, Linda falls pregnant...and the resulting storm of emotion and ultimately surprising ending will hold you enthralled.

I give this book a five out of five review. It earned it.